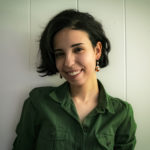 Sara Lafkir is the video editor and main videographer for…

The homestead life requires skills, ingenuity, and improvisation. Waste, unused items, and spare stuff exists as a challenge to be mined, and a need delivers the perfect excuse to get creative. This video series seeks to inspire that creativity and deliver simple solutions to everyday problems and needs.

The Builder-in-Chief Behind Carolina Coops

Sara Lafkir is the video editor and main videographer for Rooted. She was born in New York City and raised in Casablanca, Morocco. She received her master’s degree from the Magazine, Newspaper and Online Journalism program at the S.I. Newhouse School of Public Communications at Syracuse University. She was chased three times by a rooster named Fred while covering a story for Rooted and is now a self-proclaimed expert in rooster body language. Pro tip: If the rooster starts to skitter sideways, he’s about to attack. Don’t run away, just divert his attention by throwing something near him, but not at him.