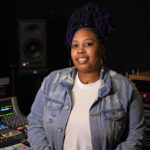 Emani Glee is a contributing writer and web manager for…

In American culture, much like those iconic butcher illustrations that feature animals divided by cuts of meat, it’s easy to see a cow or a pig and envision a couple burgers, some steaks, a pot roast, and several slices of bacon for that plate of eggs and toast. But for some cultures, it’s just as easy to see fried livers, oxtail soup, beef-tongue tacos, or brain curry. Beyond the many cuts of meat displayed behind the glass at the butcher shop or the meat section of the grocery store, there exist many more animal parts that Americans don’t want to eat and that go to waste.

In fact, animal scraps serve as one of the biggest contributors to food waste in America. More than 30% of the available food goes uneaten in the United States, according to a 2014 study released by the USDA Economic Research Service. The report identified meat, poultry, and fish as the top three food groups that result in waste. But others beyond our borders welcome that meat we refuse to eat. International trade allows unwanted offal products, also known as “variety meats” to be sold to countries that more commonly use them in their dishes. Trade Vistas, a trade news company, reported that “the U.S. exported $1.65 billion worth of variety meats in 2018 ⁠— slightly below the $1.8 billion it sold in 2017.”

Known as nose-to-tail eating, this approach prevents waste, and although it hasn’t been popular in America for decades, it has begun to make a comeback. “More recently the nose-to-tail butchery and charcuterie movements have brought offal back to the spotlight,” says Sarah Wassberg Johnson, a food historian and education director at Hudson River Maritime Museum. Offals are the entrails or internal organs of an animal which are commonly disposed of in favor of prime cuts of meat such as loin, rib, and ham. Organ meats could just as easily be a customary part of American food culture as muscle meats are, but somewhere along the way, dietary norms were set, making offals the ugly stepsister of the meat family. This could in part be due to the socioeconomic stigma that offals were for poor folks.

Historically, disadvantaged people of all cultures made use of the entire animal out of necessity. During the 18th and 19th centuries, slaves were only given the off-cuts of meat. They had to make the best of animal parts such as pig intestines, oxtails, chicken necks, and gizzards in order to survive. Many of their food preparations are still present and prized in soul food cooking today as main dishes or to add flavor to sides like beans and vegetables. During World War II, Americans also couldn’t be picky about the types of meat they ate. With the majority of prime cuts of meat being shipped to feed American troops in the war, civilians learned how to cook and eat organ meats because they were less expensive and helped with food rationing. At one point, war propaganda led to offal meals becoming a social norm, turning them into a symbol of patriotism rather than something only poor people ate. After the war, offal again became unfavorable because the economy began to improve, Wassberg Johnson says. Outside of tough times, most Americans have the privilege of eating other cuts of meat instead of the organs.

But our choice of meats is informed by more than poverty and scarcity. Thomas Schneller, a culinary arts professor at the Culinary Institute of America, says Americans are accustomed to sanitized food such as skinless chicken breasts and fatless pork chops. Although Americans may seek foods that are sanitized, many are still unfamiliar with the cuts of meat they are eating, particularly because of their separation from the butchering process. Despite that unfamiliarity, people are still consuming them; some of the most-used offal parts are present in foods considered common. For example, people don’t realize the Italian or breakfast sausage they’re eating is encased in pig or sheep intestine, Schneller says. He adds that pork round skin can also be cooked down to form gelatin that’s used in a variety of foods such as gummy candy and cold cuts like bologna.

Although Americans are largely unfamiliar with eating and cooking offals, an increasing number of chefs and restaurants are trying to change that. “There seems to be a resurgence of offcuts and offal meats in the food business these days,” says chef Joseph Pagels of The Bloom and Rose, a restaurant in Buffalo, N.Y. that specializes in Jewish cuisine. During a pop-up dinner last February, Pagels served an entire meal highlighting offal meats. Heart sashimi and corned tongue were two of the featured courses. Animals use the tongue and heart a great deal, which makes them incredibly tough, yet flavorful, Pagels says. To make these specific cuts of meat tender, they use a cooking technique called sous vide. They first vacuum-seal the cuts, and then cook them in hot water (122 degrees Fahrenheit for the heart and 185 degrees Fahrenheit for the tongue), Pagels says.

Meanwhile, at Insa, a Korean barbecue restaurant in Brooklyn, N.Y., customers’ eyes widen at the sight of blood sausage. In the culinary industry, blood sausage transcends cultures. The Korean version is called “soondae,” which is a traditional street food. “The humble beginnings of Korean cuisine is very much about wasting nothing,” says Souhi Kim, chef and part-owner of Insa. Kim says the first step of making it is to make a jus by cooking pig nose in a broth, making it gelatinous. Pork blood is used as a binder for the rice and vermicelli noodles it’s stuffed with, while the pork intestines serve as the casing for the sausage. When cooked, it features a chocolate color. Some people say it has a mineral taste, but it is velvety and savory, Kim says. “When you start talking about offals and the way that we cook it, it doesn’t sound very appetizing,” Kim adds. “But in the end, it is really delicious.”

Restaurants aren’t the only ones attempting to change how consumers understand and appreciate offals. At Myers of Keswick, a classic British grocery store in New York City, the English tradition of steak and kidney pie carries on. Chef Nino Saldana says this handmade dish has been on their menu for more than 30 years and remains a favorite — especially around the holidays. But Myers of Keswick is one of the few businesses that buy kidneys from the meatpacking district, Saldana says. Kidney meat is rough. So to prepare it, he slowly cooks the steak and kidney together for about three to four hours. The pie is made with two portions of steak for every one portion of kidneys. “It’s not 50-50 because the flavor and smell are overpowering,” Saldana says. In addition to kidneys, they also use pig’s skin, feet, and bones to create the gravy for the pork pie. These ingredients add flavor to the soup consistency and help turn the mixture into a jelly texture when cold.

There seems to be a resurgence of offcuts and offal meats in the food business these days.

The increased use of offals in the professional food industry could be just the inspiration home cooks and homesteaders are looking for to get the most use out of livestock. Organs do provide nutritional benefits, serving as a good source of protein and iron, Schneller says. And though they can be a beneficial addition to one’s diet, there are some precautions to consider. For example, the liver and kidneys filter waste from the blood, so there’s a chance they may have trace amounts of additives, such as ractopamine or steroids, which are used to speed up an animal’s growth, left after being slaughtered. And while offals aren’t unsafe to eat, it’s also important to be mindful about how long a carcass is hung because some offal meats spoil faster than others, Schneller says.

While these cuts of meat can be found at a butcher shop, Schneller recommends reading one of expert butcher Adam Danforth’s butchering books for those interested in butchering at home. It’s fundamental to be knowledgeable about the anatomy of the animal to butcher it safely without contaminating the meat, Schneller adds. As an experienced butcher, he requires a whole morning or possibly a day to butcher an animal properly. “It’s a very kind of meticulous process, but not impossible,” he says.

When you start talking about offals and the way that we cook it, it doesn’t sound very appetizing. But in the end, it is really delicious.

Yet offals may still seem undesirable to some because popular American culture has conditioned people to regard them as foreign. Rather than viewing animal’s intestines as a typical dish to cook up like a rack of ribs, they’re often viewed in disgust. It might be easy to overcome the thought of offals as vile if one considers the fact that they also come from the same animals that burgers and steaks are made of. But for those who still can’t make up their mind about offals, Schneller has some frank advice: Get past the squeamishness and just think of it as food.

Emani Glee is a contributing writer and web manager for Rooted. She received her master’s degree in Magazine, Newspaper and Online Journalism from the S.I. Newhouse School of Public Communications and a bachelor’s degree in communications from the University of Southern California. She has an insatiable curiosity about the world and dreams of living out her wanderlust. She is passionate about being a storyteller who drives social change by promoting cultural awareness and inclusion in the media.

Here is a short list of how different parts of the pig are used in various cuisines. 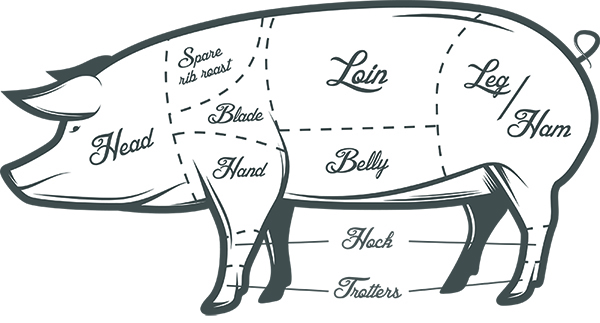 Saumagen (German)
This dish, which translates to “sow’s stomach,” originated from southwest Germany and is served as fried slices. The pig’s stomach serves as the casing to hold a stuffing made of pork, vegetables, and spices.

Pork skin aspic (Chinese)
While aspic, a dish made from meat stock that sets into jelly, can be seen all over the world, this rendition, which is popular in northern China, is made from pork skin and spiced stock. It’s typically served cold with a soy sauce and vinegar dipping sauce.

Faggot (British)
A supersized meatball made from pig’s heart, liver, and belly, this cheap dish was popularized by country folk in western England and is commonly served with mushy peas, mashed potatoes, and onion gravy.

Syltelabb (Norwegian)
A delicacy in Norway, this dish’s name translates to “preserved pig feet” and is eaten during Christmas time. It’s made of boiled salt-cured pig’s feet and served with Christmas ale aquavit, which cuts through the dish’s saltiness.

Sekba Babi (Indonesian-Chinese)
This popular street food is a stew made of pork meat, pig’s ears, tripe, and innards mixed with Chinese herbs, soy sauce, and garlic for a sweet and salty flavor.

Chicharon Bulaklak (Filipino)
This crunchy snack uses mesentery, the tissue attached to the pig’s small intestine. It’s deep-fried until crisp and is served with a spicy vinegar sauce.

Aep ong-o (Thailand)
Hailing from northern Thailand, this dish mixes fresh pig brains with curry and chili paste, and is then wrapped in banana leaves and grilled over a low fire.