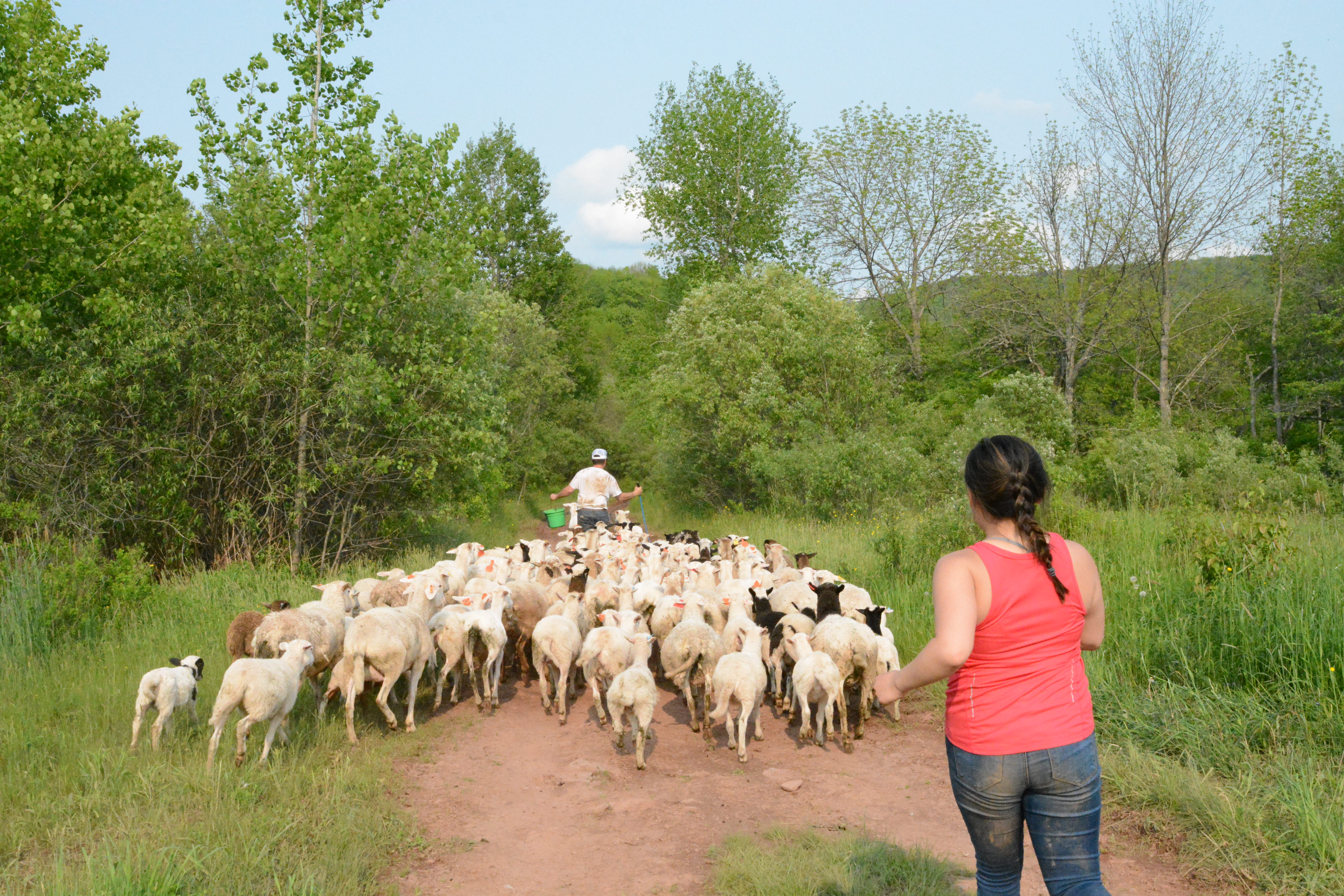 Ellie Coggins is the art director and photo editor for…

Armed with a bucket of grain and a shepherd’s staff, Jason Connelly marched across the pasture on the Weathered Hill Farm in South Kortright, N.Y. as a herd of sheep chased after him. The smell of fresh grass and manure filled the warm air. Jason’s dad revved up the four-wheeler. His grandpa stayed with the truck to try to block off escape routes up ahead. Meanwhile, I held up the back, jogging to try to keep an old, stubborn sheep and inexperienced lambs from lagging too far from the group. Our goal: Move the hungry herd from the grazed-over pasture to fresh, tall grass that would serve as their next meal.

Jason chimed in, warning that I might hear “a few choice words” from the three generations as they maneuvered around 100 sheep. “It’ll either go really well or really badly,” Jason adds.

We and the sheep approached a fork in the road: One side led to the path toward tall, fresh grass for grazing and the other led to the field that contained my car and tent, my digs for this farm-stay experience. They headed for my tent. I raced to stand in front, trying to keep them away from destroying my tent and going in the right direction. But like a bull through a matador’s cape, they dodged both, escaping through the gap between my red tent and a rusty, red truck. Their diversionary tactic and the adrenaline it sparked erased all concern about keeping my boots clean or my stuff safe. I scrambled to the back of the group, shrieking and waving my arms, forcing them closer to Jason. One sheep got the message. As the one attentive or obedient (hard to know which) sheep began to follow Jason again, the others fell into suit. As I watched them amble toward their new pasture, I belted out laughing, flooded with relief that they had their next meal, and I had my tent.

But I began to doubt I qualified as farming material. The previous day, as I drove my red Buick Encore through the winding roads of the Catskills and watched my phone dip in and out of cellphone service, I wasn’t sure what to expect from my farm-stay experience. As I looked through listings on various sites — Airbnb, Farm Stay USA, Hipcamp, and more — it dawned on me that more people want to get a taste of what the homesteading life has to offer through the safety of a temporary vacation. What might’ve started with “WWOOFing” or living and working on organic farms has prompted similar experiences today on vacation sites, possibly prompted by our growing collective interest in knowing where our food comes from. Jason and his family have hosted around 40 people in their two years of opening up their farm, both to make some extra money and share their passion for their lifestyle. I’ve always loved exploring new places as my well-worn hiking boots suggest, and as someone who has never farmed before but cares about knowing where their food comes from, the idea of disconnecting from regular life and learning some new skills interested me. I found the Connelly family’s listing online and decided to venture to South Kortright to see if homesteading offered something I wanted to pursue.

A large red barn against a backdrop of gray sky served as my visual signpost for Weathered Hill Farm. When I arrived, Jason greeted me with a smile and put down his wheelbarrow to shake my hand. I felt a bit like an imposter as I stood next to him in my freshly-washed skinny jeans and hiking boots. He wore muddied rubber boots, dirt-crusted denim pants, and a warm demeanor. His friendliness made me feel welcome enough to ask any questions and try my hand at skills new to me. I met his wife Sarah when she returned from work at a pharmaceutical company and their children Clara and Otto, who are four and almost two, respectively. First-generation sheep farmers, Sarah and Jason are young and fit. They always knew they wanted to have livestock, although they originally wanted to go into dairy or beef. When they found out that one of Jason’s customers was selling sheep, they decided their farm was better suited for sheep anyways. While they admit the work is physically exhausting, they’re content, especially as they observe their children’s joy of wandering the barn to fill their plastic pails with fresh eggs. Their barn and land are home to a whole menagerie: Dogs, horses, a pig, chickens, and of course, their many sheep.

It’s why Jason and Sarah named their online Hipcamp listing “Counting Sheep,” the playful name that caught my attention when I first scanned through farm-stay experiences online. After seeing the sea of wool in person, I understood why they chose it. Even Jason never knows exactly how many sheep there are off the top of his head.

Upon arriving at Weathered Hill, the physical routine of sheep farming quickly replaced the serenity of the surrounding landscape. Jason led me out to the sheep’s pastures, where we would set up new fencing. The trees that bordered the pasture blocked the rest of the farm from view, making this piece of the property feel like the sheep’s own private area. When I saw the pasture, it was clear why the sheep needed to be moved. Within the fencing, the grass was grazed almost to the dirt while the surrounding fields flourished with thigh-high grass that waved when the wind blew across it.

After only one afternoon of work — taking the sheep’s moveable fencing down, carrying it over my shoulder to the next plot of land, and reassembling it — I fell asleep to aching muscles unaccustomed to physical labor. Rain pelted the tent during the night, creating a dense, moist start to the day and making it difficult to get up the next morning. I pulled on my dirty jeans and boots and returned to work. It also amazed me that Jason, who moved the fencing with ease and seemed to have this innate understanding of the sheep’s feelings, didn’t come from a background of sheep farming. Even his dad, the guy who manned the four-wheeler during our sheep-migration mission, lacks sheep history or credentials. He’s a full-time ophthalmologist. Same with Jason’s grandpa, who began helping the young couple out with the sheep when they moved to Weathered Hill in 2012 and began their operation.

Outside of the sheep farm, Jason works as a hoof-trimmer, and he let me join him the next day at the Hager Farm, where he would be trimming dairy cows’ hooves. After a 10-minute drive on County Highway 33, we pulled left and onto the Hager’s property and toward their sprawling blue barn. Each Hager welcomed me to their farm, and I learned that three generations of Hagers run their operation of nearly 500 cows — from milking to feeding and raising calves.

Adam Hager, part of the farm’s third generation, is working to eventually take over the farm from his father. Walking through the various barns, I struggled to imagine a life like this for myself, working with my family every day and being surrounded by the strong smell of manure. But I enjoyed witnessing the love each Hager possessed for the animals. Henry Hager, Adam’s dad, named each one of the cows himself, and if given a description of a particular heifer, can pinpoint her, along with her mother or calves.

“I’ve been doing this for almost 30 years and can’t quite do that,” Adam tells me with a laugh, as he persuaded Tina, a stubborn white heifer with large black patches, to get in line for milking.

While on a self-guided tour of the various barns, I ran into Bethany Hager, Adam’s wife. Bethany married into the Hager family and doesn’t come from a background of farming, but she said that she fell in love with it after her post-college return to Central New York. “I’ve met an amazing group of people who love their animals like family,” Bethany says. I smiled as I watched her daughter Lucy, almost two years old, walk around the farm and pointed to each of “her cows” with fondness.

But Bethany admits it wasn’t always easy adjusting to her new life, adding that farming is a 24/7 job. Once, when she, Adam, and their children returned home from a family trip, the rest of the family called them to help find some escaped cows. Bethany’s honesty about the farming life, the challenges it presented, and her occasional reticence relieved the guilt I felt for the constant drip of thoughts in my head that told me I lacked the ability and the disposition to thrive on a farm despite how much I love the outdoors, nature, and animals.

The next morning, outside my tent, I put on my muddied boots to return home and began to review the highlight reel of experiences in my head of the last two days: Traipsing across old-fashioned barns, stepping in cow dung at a dairy farm, sprinting to herd sheep back to their pastures, and even trudging through a field to use a compost toilet. I began this experience wondering if a farming lifestyle was for me. Leaving, I know it’s not. At least not right now. But the Connelly’s, who found their love for farming life even though they lacked any experience and at a range of ages, demonstrated to me the possibility of arriving at that passion down the road. But as I load up my Buick, head out on Doroski Road, and grab one last look at that red barn in the rearview mirror, I still smell the manure and the mud and think to myself, “I really need to get my car detailed when I get home.”

Ellie Coggins is the art director and photo editor for Rooted. She received her master’s degree in the Magazine, Newspaper and Online Journalism program at the S.I. Newhouse School of Public Communications at Syracuse University and her bachelor’s degree in English literary and cultural studies from the University of Cincinnati. She is passionate about health and environmental topics and hopes to continue telling stories relating to them in the future.