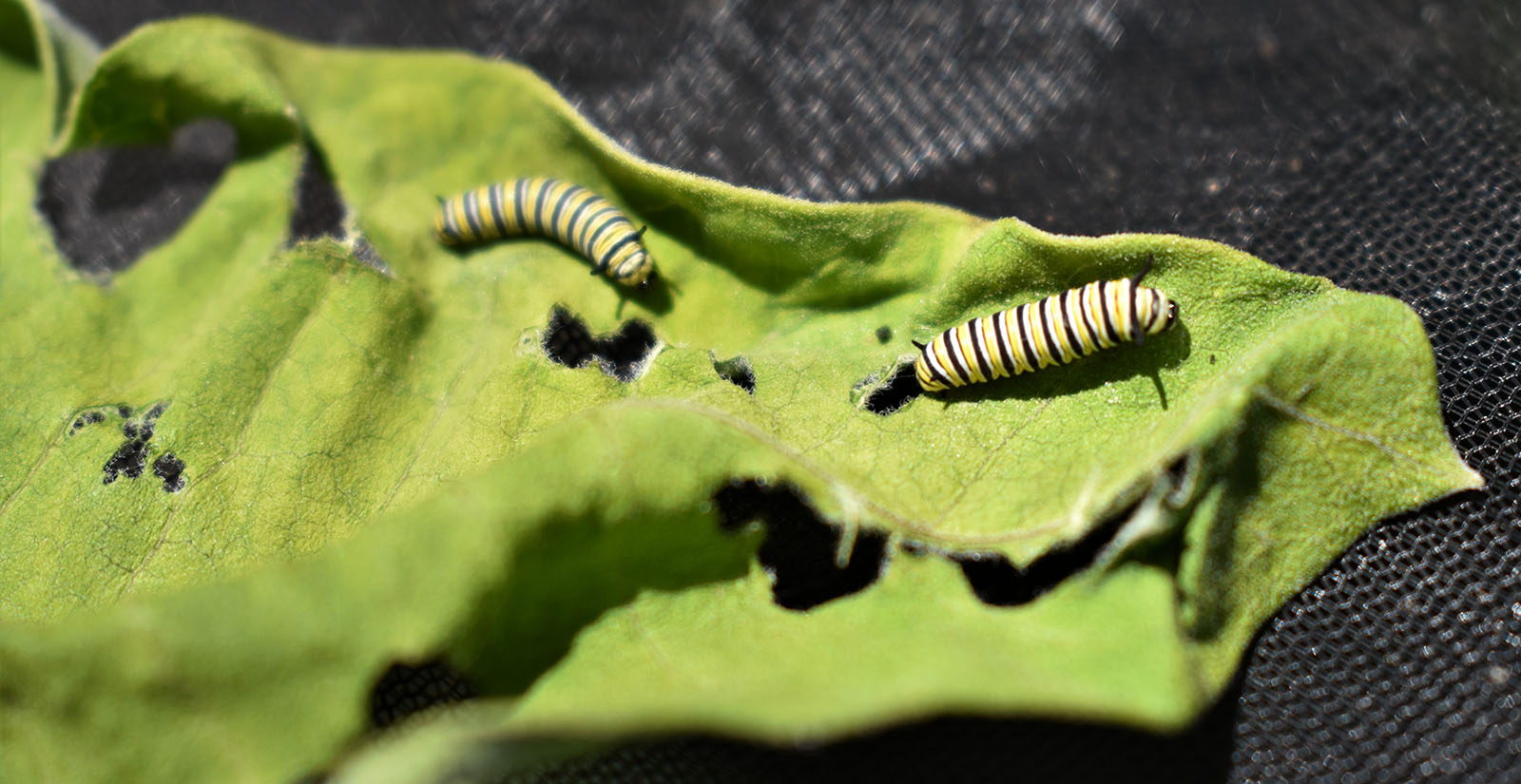 Sajida Ayyup is a contributing writer for Rooted. She specifically…

It isn’t every day you discover a plant along your biking route swarming with butterflies. Stunned by the sight of a single plant hosting a family of reddish-orange winged insects, David O’Donnell, a self-taught naturalist from Clarence, N.Y., couldn’t help but stop and observe. All he knew was that those vibrant wings with black veins belonged to the monarch butterfly family. When he got closer, he noticed two caterpillars munching on the leaves of the unfamiliar plant, and in a rush of curiosity, plucked one of them and pedaled home. But the plant’s identity escaped him. With some research, he learned that Asclepias incarnata, more commonly known as swamp milkweed, exists as the only plant that hosts monarchs. “I went back and the whole plant was mowed to the ground,” O’Donnell says. “Everything was gone.” So he dug up the two-feet-wide root system and brought it home in hopes of reviving it.

That was 20 years ago. Since then, O’Donnell, now 65, has continued to plant and tend to the milkweeds in his garden, which he established in 1999 as the Eastern Monarch Butterfly Farm. Now, around 1,500 monarchs call it their home every year. After learning more about milkweeds and monarchs, O’Donnell embarked on a professional journey to raise awareness about the gradually depleting eastern monarch’s milkweed corridors in North America, the path they take when they migrate to the South during the winter and back to the North in the spring, and how to restore them. “A monarch butterfly is a messenger, and its disappearance is the message that we need to start coexisting with nature or we’re going to start losing not only things we love but things we need to survive,” O’Donnell says. Besides tending to both milkweeds and monarchs on his farm, he travels to different cities as an advocate and educates people about the eastern migration corridor. Although his farm is not open to the public, he sets up a table at his local farmers market every year as an extension of his campaign and sells milkweed seeds that are native to New York online.

Many share O’Donnell’s long-standing concern for the winged creature. In 1993, the Center for Biological Diversity, an Arizona-based nonprofit working towards protecting endangered species, began surveying the population count of monarchs. Since the 1990s, monarchs have lost nearly 165 million acres of their habitat due to herbicide spraying. This was followed by the eastern monarch population dropping from one billion to 225 million, while the western monarch population plummeted from 1.2 million to fewer than 30,000. In 2014, the Center petitioned the U.S. Fish and Wildlife Service to protect monarchs under the Endangered Species Act. Some conservationists, like O’Donnell, are against this petition and don’t want monarchs to be listed under the ESA because once the listing goes live, rearing monarchs in backyards will become a process involving permit requests and background checks. But because there needs to be more data to fully assess the butterfly’s endangered status, the ESA listing decision deadline was postponed to December 2020.

There’s also been a growing interest in people planting milkweed for monarch conservation, especially in urban spaces. For instance, in a 2019 survey conducted by Frontiers in Ecology and Evolution, a journal on evolutionary biology and conservation, 81% of 226 participants from four metropolitan cities who said they “managed a plantable open space” were also growing milkweed, and 63% were willing to plant more in the next five years. Of all the indicators of imbalance, the pollinator population, which includes bees, moths, and butterflies, in an area reflects where the ecosystem is headed. O’Donnell says if homeowners allow native plants to grow on their property, it would be beneficial for native pollinators. “If we can get people to start re-engaging with nature, leaving the native plants that are already there, we can make a difference,” he says. He also thinks the younger generation is “waking up” to realize that they have to clean up the mess that they live in. “We didn’t inherit this planet from our ancestors. We’re borrowing it for our children and our friends’ children. We only borrow something if we want to give it back,” he says.

Pollinators around the world are having a really hard time because there just isn’t nearly enough habitats left.

Educating people about this environmental balance comes foremost, and nonprofits like The Watershed Institute in Pennington, N.J. are devoted to do so. In 2000, they opened a butterfly house with indoor and outdoor gardens that modeled typical habitats in central New Jersey for their native butterfly and caterpillar species. It was also used to teach people, especially students, about native milkweeds; there are around 100 varieties, but the most common ones are butterfly, swamp, purple, and antelope. “Pollinators around the world are having a really hard time because there just isn’t nearly enough habitats left,” says Samantha Bernstein, an educator at the Institute who’s been teaching visitors and school groups about the importance of native milkweeds for nearly three years. “There are not enough places left for [monarchs] to reproduce.”

Bernstein remembers the first time she saw a butterfly scrambling to get out of its chrysalis. With weak little legs, a water-clogged abdomen, and wet wings, it took almost an hour for the monarch to dry out and fly away. But habitat destruction makes the 3,000-mile-long journey to Mexico and southern California more difficult for millions of monarchs that migrate there each fall. For example, herbicide-resistant corn and soybeans are pushing farmers to mow down weeds, including milkweed, especially in the Midwest. Currently, there are only 1.34 billion milkweed stems left in the country, and 3.62 billion are needed to reestablish the monarch population to a sustainable size, according to a 2017 U.S. Geological Survey study.

Although those at the frontlines of monarch conservancy understand and appreciate the role of milkweed in protecting monarchs, the plant still struggles to earn that appreciation among the general population. For starters, there’s the name. The appearance of the word “weed” conveys to many that it has a less-than-honorable role in the garden even though it’s actually a wildflower, and it serves as an invitation to those tasked with mowing to eliminate it, just like that day when O’Donnell first saw the plant on his biking route, only to find it whacked down when he came back. In fact, during the first few times O’Donnell set up his table at the Clarence Hollow Farmer’s Market to educate people about milkweeds, he mostly received skepticism from the shoppers who passed by his booth. “People would think of it as a bad plant right off the bat,” he says. But when he started bringing his caterpillars and adult monarchs with his milkweed, people stopped and paid attention. “Now, people are looking for milkweeds, and there’s been an increase in monarchs the last two years — about 140%,” O’Donnell says. “This year, they’re up, so I believe it’s contributed [to that increase] because people are planting more in their pollinator gardens.”

A monarch butterfly is a messenger and its disappearance is the message that we need to start coexisting with nature or we’re going to start losing not only things we love but things we need to survive.

Carolina Bourque’s fascination with watching a monarch escape its chrysalis turned into a conservation agenda like that of O’Donnell’s. The fisheries biologist and hobby farmer from Lafayette, La. started planting native milkweed several years ago to help protect the monarchs’ migration corridor. She even started raising her own monarchs this year, which she says can be difficult at times because she has farm animals, like chickens, that enjoy feasting on the milkweed and caterpillars. “I usually catch the caterpillars when they are small and put them in an enclosure,” Bourque says. “Then, I have to clip fresh clippings from the specific host plant for each of the caterpillar species.” She also wants to raise more monarchs in an enclosed space to increase their chances of survival. “With so many chemicals being used — herbicide control, mosquito control — damages to the monarch caterpillars are huge,” she adds.

But monarchs and their precious milkweed must overcome more than shrinking habitats. For Orley Taylor, founder of Monarch Watch, a volunteer-based network of students, researchers, and environmentalists at the University of Kansas studying monarchs, climate change poses an equally threatening challenge. “It’s going to get warmer and warmer, and that’s going to change the tolerance of heat for monarchs,” Taylor says. He says that in about 50 years, the heatwave will effectively push the monarchs off of the Mexico migration route. It’s also possible that increasing carbon dioxide levels can make milkweed too toxic to eat for caterpillars. “What we’re going to have to do is appeal to those people who are really concerned about the environment enough to invest in things that keep the system together,” he adds.

But with nearly 6 million acres of pesticide-free milkweed habitats that need to be restored, Taylor says it would take more than just action from organizations to protect monarchs. “We actually need to involve all three countries — in this case, Mexico, Canada, and the United States — because many [monarchs] migrate across the three countries,” he says. He affirms that people don’t necessarily need to breed butterflies, but can focus on creating habitats for them. “It will sustain pollinators,” he says.

Back in Clarence, O’Donnell says he hasn’t lost faith in humanity’s ability to save the monarchs. He gets inspiration from Baba Dioum, a Senegalese forestry engineer and environmentalist, who once said, “In the end, we will conserve only what we love, we will love only what we understand, and we will understand only what we are taught.” O’Donnell recites that quote as he points to the first monarch on the migratory route that flies above his tool shed. “That kind of says it all,” he adds. While O’Donnell and his three visitors stand under the shade of an old tree at his home, they catch a glimpse of orange-black zigzag across his milkweed patch before it disappeared.

Additional reporting on this story by Rachel Burt.

The Reclamation of Ancestral Herbalism

Modern Craftivism: The Power of the Stitch

Sajida Ayyup is a contributing writer for Rooted. She specifically focuses on stories driven by data and trends. Prior to Rooted, she worked as the executive editor at 360 Degrees magazine, videographer for Medley magazine, and staff writer at The Daily Orange ― the first student newspaper to have comics. Being a self-proclaimed Marvel geek, she can settle your storyline theories and bore you with movie references. On rainy days, you will find her playing Frank Sinatra songs on her ukulele or re-watching the Dead Poets Society.