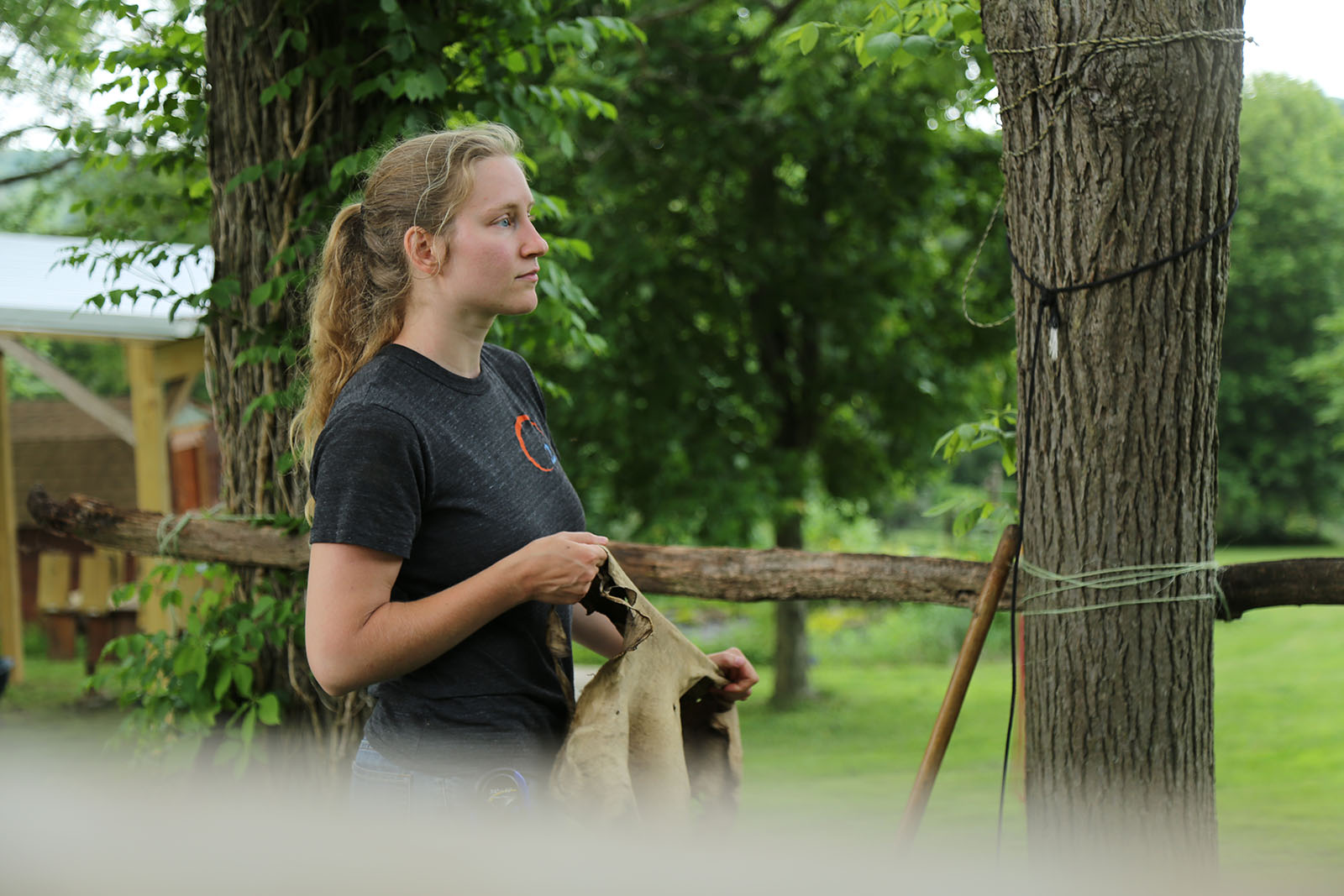 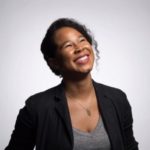 Michaela Greer is a contributing writer for Rooted. She is…

Along the road, trees that boasted stunning crowns of reds, oranges, and yellows a few months prior stood bare; only weathered, leafless trunks stood in defiance of the frigid December winds. As the sun shifted over the afternoon sky, Christine McGuigan, a 26-year-old Ohioan homesteader who uses social media to demonstrate her pursuit of outdoor arts, hastened toward Ohio’s 355-acre Tinkers Creek State Park, determined to get a hike in before the day closed. Spotting a limp squirrel lying on the shoulder, she turned to her friend: “Do you mind if I turn around and pick that up?”

The pair briefly spoke about taking the critter to a nearby animal clinic, but its cold body and glazed eyes told them it was dead. McGuigan opened her backpack and placed the animal inside. Later, as the two hiked a quiet path along the trail, she decided to skin the squirrel. But her inexperience showed. As her friend watched, it took her almost two hours to separate the clinging membranes from the delicate hide. “If you know how to skin an animal it’s not messy, it’s not bloody, but I busted it because I didn’t know what I was doing,” McGuigan says. “And my friend, he just sat there. He was so nice, he was like, ‘I wish I could help but I don’t know how’ and I was like, ‘I don’t even know how to ask for help right now.’”

She took the skin home and continued to work, stretching the skin out on a rack, and using egg yolks to color the hide before smoking it. Later, a piece of the squirrel’s skeleton would become a fastener for the pouch she crafted from the skin, and she used dogbane, a variety of hemp, to craft a handle. For a while, she used the pouch to carry seeds for the birds she fed in the neighboring woods.

That pouch served as her first roadkill project after McGuigan became interested in the process after taking a few lessons from a friend she met online. One day, while leading a group of interested friends through a patch of wilderness and offering tips, the friend found a dead squirrel and decided to offer an impromptu lesson. After demonstrating on a section of the animal, he passed the animal to the other three or four participants, who took turns skinning a leg here or a torso there. McGuigan was hooked. And six years later, her passion for turning roadkill into leather has blossomed into a hobby she delights in, making everything from knife sheaths to handbags.

Through trial and error, McGuigan has graduated from small critters like squirrels and raccoons to deer and coyotes, all the while ensuring that as much of the animal as possible is saved. “If it’s not fresh, then I don’t bother because most of the time, if it’s not fresh, then it’s just nasty,” she says. “You can easily tell when it’s not worth taking because the hair will kind of just slip right off, and if you want to tan it with the fur then there’s no point in keeping it.” She skins viable kills, but if they are fresh, she also butchers them for meat — some for herself and the rest to make food for her tortoiseshell, calico cat named Opal.

But McGuigan and Opal aren’t the only ones delighting in her roadkill and wilderness pursuits. Her 2,398 Instagram followers also take notice of her skills. On any given day, viewers can watch videos of McGuigan — who casts a dramatic figure with a 5’7” frame, muscled, pale arms, long auburn hair, farm-fresh face, and preference for brown and gray tank tops and jeans or black tights — as she uses dried deer sinew as thread, posts drawings of eagles and turkeys, and shares pictures of wild-gathered ingredients for meals and teas.

After a few months of seeing McGuigan post about her hide tanning and life on the farm, Nebraskan bowyer and fletcher Correy Hawk reached out to McGuigan to arrange a trade when he noticed that she also was an archer. In exchange for a 3-by-3 patch of leather for making bow handles, he sent her six handmade poplar arrows with wild goose feathers as the fletching. “Her hide tanning skills are top-notch. It’s perfect leather. I couldn’t have asked for anything better,” Hawk says. “It’s got a beautiful deep color and it’s soft and it just worked perfectly for what I needed it for. I’ve actually already put one piece of it on one of my personal bows.”

But since McGuigan hasn’t begun to sell her creations, Hawk serves as a rare exception. For most of McGuigan’s Instagram followers, their interaction with her remains strictly virtual. Many are homesteaders themselves and regularly offer tips and share their experiences in the comments section such as the one who stated that buffalo hides are the hardest to tan.

For McGuigan, who’s a novice archer, perfecting her archery skills has fallen on to her to-do list. It’s been overtaken by other goals — hiking the Tour du Mont Blanc later this year and creating a two-piece skirt and top outfit out of deer leather. “My whole life I’ve been passionate about nature, so living close to it, living off the land, growing your own food, just being connected to how nature functions is very fulfilling for me,” McGuigan says.

But it took several years for her to find a path to this life. As a teenager, McGuigan says that she never envisioned herself being happy with a typical 9-5 job. She describes her younger self as depressed, fed up with school, and on the search for a way out. She knew that she would need to find a way to support herself and so started to consider growing her own food. Googling finally brought her the solution she was searching for.

“The word homesteading kept coming up and I was like, ‘Oh my God, people actually do this.’ I didn’t know it was a thing,” McGuigan says. Sometime later, while walking through a farmer’s market, she met a seller whose sign stated that the cheese he sold was from a homestead. “So, I went to him and I was like, ‘Can you tell me anything about homesteading?’ and he was like, ‘Oh yeah! You need to come back after hours so we can talk.’” When she did, he introduced her to his friends who were homesteaders, including some who were closer to her age. She went with them to permaculture talks and started frequenting local homesteading events. They gave her fresh produce from their farms and pointed her in the direction of opportunities for work.

Eventually, after dropping out of college after her first semester, she found herself working on a farm that she dubs a “beginner homestead” owned by a couple she found on a now-obsolete website. “My parents really expected me and my sister to go to college like all my cousins and the whole family did, but I knew I didn’t want to go because I knew how much I didn’t like school and how I wanted to basically live off the land,” McGuigan says. “I knew there was really no point in me going so I went just to show them like I tried, you know? But I was planning to leave as soon as I went.”

The word homesteading kept coming up and I was like, ‘Oh my God, people actually do this.’ I didn’t know it was a thing.

Over the next six years, McGuigan bounced around between homesteads, learning from experience about life on the farm. Now she lives on a 19-acre homestead, owned by Andy Pastor, in Fresno, Ohio – her neighbors being mostly Amish and a few other local farmers. Dirt path roads lead the way to a cabin that overlooks the rolling hills where the Highland cattle graze all day. In the summer, when the dew is still fresh on the grass, peonies add a sweet fragrance to the morning air. The occasional bunny can be spotted throughout the day, as two especially territorial roosters, Fred and Soup, parade around followed by a half-dozen hens.

In exchange for rent, McGuigan tends to Pastor’s farm, taking care of a small garden, a 30-year-old horse, a donkey named Jack, four emus, pigs, a clutch of chickens, goats, and cows. “She is really weird, a very weird person,” Pastor says, teasing McGuigan. “I think she has definitely some unusual skills that most people don’t even know existed, to be quite honest with you.” Pastor went on to extoll McGuigan’s determination, strength, and abilities, sharing how helpful she was when they harvested their first pig and her mastery of starting her own fires with just two pieces of wood.

But it was her penchant for roadkill that concerned her family and friends at first. Now they often call her to tell her when they’ve spotted a dead animal. McGuigan says summers are usually harder to find roadkill because the heat makes the carcasses spoil too quickly. She relies on an animal’s eyes to tell her if an animal is viable. Clear eyes signal opportunity. But if they’re cloudy, the animal is too far gone. And she learned the hard way to watch out for distended stomachs. “I did pick up a bloated squirrel once because I was still new, and I was like, ‘Oh, it looks pregnant,’” McGuigan says. “Well it was bloated, and it was disgusting.” She did skin it, and that process taught her much about how death impacts and alters every part of the animal — from the texture of the tissue to its smell. “Fresh roadkill, when you’re skinning it, it doesn’t smell unless you puncture the organs or something,” she adds.

Ultimately, McGuigan wants to have a homestead of her own, and she hopes to sell her leather goods on the side. Right now the most difficult part of realizing that dream is financial since her compensation is solely room and board. She relies on doing odd jobs from painting to pet sitting to make money.

She is really weird, a very weird person. I think she has definitely some unusual skills that most people don’t even know existed, to be quite honest with you.

“Of course there are stresses, anywhere, on farms and things like that, especially financially, but it’s just such a beautiful life, and I wouldn’t want to live any other way,” McGuigan says. “I feel healthy inside and out doing this.”

McGuigan demonstrates her love for the life she created in daily acts and in frequent posts. Today, in the afternoon sun, she pulls and massages the skins. Occasionally, she checks the cobweb-like fibers of the hide for signs of weakness. Her athletic figure casts dancing shadows on the lawn as the hours pass. If enough daylight remains, she’ll collect dried wood to smoke the mostly dry strip, funneling the fumes into the threads. If not, she’ll add it to her ever-growing list of chores, another hide for another day.

Michaela Greer is a contributing writer for Rooted. She is a graduate of the Magazine, Newspaper and Online Journalism program at the S.I. Newhouse School of Public Communications at Syracuse University.