Sajida Ayyup is a contributing writer for Rooted. She specifically…

Fake news isn’t limited to social platforms and presidential campaigns. Even barnyard animals suffer the slings of inaccurate information. Exhibit A: Mike the Headless Chicken, an animal that toured America in 1945 along with other strange creatures under the pretense of being “medical miracles.” The story was Mike lived without his head for around 18 months and that helped spawn the idea that chickens possess the power to live without their heads. But when Mike’s owner took him to the University of Utah in Salt Lake City, they found that the vein responsible for carrying blood from his heart to his brain and back was intact despite the reality that most of his “head” area got axed. So technically, he wasn’t headless. But the story earned Mike a huge fan following and several magazine features. 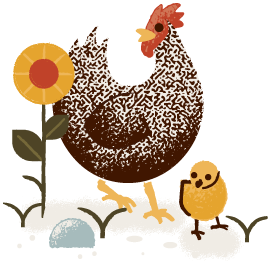 Thankfully, the only way to combat fake news is with facts. So we’ve enlisted Joyce Vaughn, who has been educating people about poultry for more than 50 years with her husband, Robert Vaughn, to help set the chicken myths record straight. The Vaughns are members of the American Poultry Association, which helps classify different kinds of breeds based on their purpose and traits. “We’re always glad to help people learn about poultry and help people get started,” Joyce says.

So with their help, we offer you the most common chicken myths, including miracle Mike:

1. A chicken can live without its head

Well, to be blunt: No creature can live without its head (with the possible exception of some insects that can survive for a few days minus their noggin). The reason for this is that the brain controls everything in the body, and in its absence, the body fails. In the case of Mike, the headless chicken, his head was missing, but his brain remained intact. And Joyce affirms that chickens can’t live without them. “When you cut their head off, the chickens will die,” she says.

Quite the opposite. Joyce says that they love to eat bugs. “They can listen, find worms and bugs in the grass, then scratch for them, and get them,” she says. In fact, chickens are categorized as omnivores and are known to eat lizards, snakes, and mice.

Nope. Thanks to their propensity to snack on bugs and critters, chickens can serve as pest-control agents, tidying up the yard and removing unwanted nuisances. But the fowl lack the ability to control their surroundings, and Joyce says that while owners must bear the responsibility of cleaning pens, chickens themselves are clean birds. However, one favorite activity may add to their dirty mythology: They do love a dirt bath. Domestic chickens roll around in dust to keep their feathers clean and shake off any lice, mites, and other parasites off their bodies. (Don’t judge.) 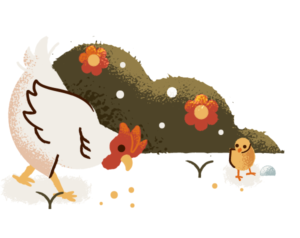 4. You need a rooster for egg production

While you need one to fertilize eggs, you don’t need a rooster for egg production. That means if you raise chickens solely for their eggs, you don’t need to enlist a rooster because hens ovulate daily. And a chicken is capable of laying eggs every day: Its body begins to process the next egg cycle as soon as it lays an egg.

Chickens are just as cognitively, emotionally, and socially complex as most other birds and mammals, writes Dr. Lori Marino of the Kimmela Center for Animal Advocacy in Kanab, Utah, in her study titled, “Thinking Chickens: A review of Cognition, Emotion, and Behaviour in the Domestic Chicken.” They know to go into the chicken house to lay their eggs in their egg boxes, says Joyce, adding that chickens can sense if you’re on your way to feed them and will come toward you.

Like all other birds, chickens have wings. Chickens that live in the wild can fly a few yards, but those that are bred for meat struggle to lift their own weight. Domesticated chickens are capable of flying for a short time. “They can fly short distances. The lighter ones can fly, not up in the trees or anything,” Joyce says. But there are definitely situations where wings are flapped and its body rises off the ground into the air. “They can fly across their pens if they are feeling good or when you first let them out,” she says of those that live in people’s backyards.

Along with the chicken’s breed, three factors inform a chicken’s (and therefore an egg’s) size — feed, protein, and linoleic acid portions. Linoleic acid is one of the fatty acids that chickens need for hormone synthesis. While chickens can convert and absorb other kinds of fatty acids from their feed, they can’t do the same with linoleic acid. Mature birds that have reached the ideal body weight will eat a little more than they are used to, so they need more protein along with the normal feed. In fact, a study conducted by Applied Poultry Science Inc. in Orense, Spain found that a linoleic acid diet produced eggs with a greater yolk to albumin protein ratio, making the egg size larger. But adding linoleic acid to a chicken’s diet is a complicated process and may tamper with a chicken’s health. So before adding it, learn more about your chicken breed and consult with chicken experts such as the Vaughn’s.

The Alpacas of Rocking Horse Farm

Sajida Ayyup is a contributing writer for Rooted. She specifically focuses on stories driven by data and trends. Prior to Rooted, she worked as the executive editor at 360 Degrees magazine, videographer for Medley magazine, and staff writer at The Daily Orange ― the first student newspaper to have comics. Being a self-proclaimed Marvel geek, she can settle your storyline theories and bore you with movie references. On rainy days, you will find her playing Frank Sinatra songs on her ukulele or re-watching the Dead Poets Society.