Texas homesteader Julie Torres knows from experience how important it is to protect her chickens from predators. She once lost almost an entire flock of chickens overnight to raccoons that simply beheaded them as they tried to remove the fowl from the coop. She lost three another night to what she believes was a skunk. And her own dogs took out a few. And then there was the time she went out of town and left her daughter in charge. “There are steps when caring for the animals, and my daughter missed a step, so I came back to a chicken massacre,” Torres says. “All my layers were dead so I had to get more chickens and had to store-buy eggs.” 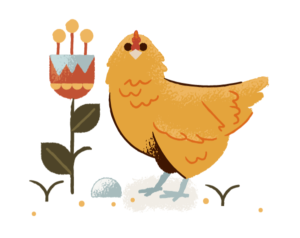 Raccoons, skunks, and dogs aren’t the only animals looking to dine on chickens. A long list of animals and birds prey on chickens, including eagles, hawks, foxes, and coyotes. Elaina Enzien, a field specialist at the University of New Hampshire Cooperative Extension, says everything likes and eats chicken, so there aren’t too many predators that wouldn’t go for them if the opportunity arose. She considers weasels the most troublesome. “Family members of mine have had some weasel problems. They go in and only eat a couple and slaughter the rest just for fun in the space of a night, so if you get a weasel in there, that’s pretty much it for your flock,” Enzien says, who also notes weasels can squeak in through such small spaces.

Luckily, there are ways to keep your chickens safe from harm and maintain your peace of mind. Below, homesteaders and poultry experts offer tips and tricks to keep your coop massacre-free:

1. Blocking Out the Haters (Predators)

If you’re worried about predators burrowing under your coops and attacking your chickens from the inside, consider fortifying the bottom of the coop with a small brick wall or something similar that thwarts burrowing.

McKinsey Hawthorn, who lives in a remote area and therefore shares her property with wolves, cougars, foxes, badgers, coyotes, and rattlesnakes, has had chickens for the past 12 years. She says most predators come around when the chickens return to the coop to roost. Because of this, she built her coop over a cement slab that she poured to keep predators from digging their way in. Hawthorn says thanks to the slab, she has never had any predators in the coop — including snakes.

John Boney, a professor at Penn State University, agrees predation is a big problem — particularly with birds raised outside. So he recommends doing double layers of protection during the day, like wooden fences surrounded by those that use electricity to keep critters out, and creating fenced-off portions of fields that feature netting over the top to keep out hawks and other birds of prey. An important thing to remember is chicken wire is flimsy, so invest in stronger fencing. 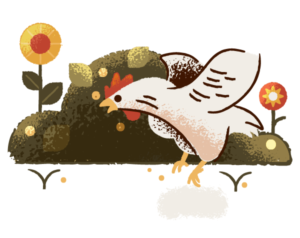 If you’re in the market for a guardian to watch over your chickens while you can’t, there are a few options to consider. Co-housing with a pygmy goat, according to homesteader Tiffany Hamill, keeps away hawks and such, and also keeps roosters from being so mean to the rest of the birds because they think the goat is top dog. “One word of caution — though co-habitation itself is generally a safe, practical bet, it’s not a good idea to just throw a pygmy goat into an unmodified chicken pen and expect the two species to automatically flourish,” wrote Hamill in an article for Backyard Poultry titled “The Wonders of Co-housing: Pygmy goats bring peace to the flock.” “Since chickens — even roosters — can’t really defend themselves against prancing hooves and playful head butts, it’s still necessary to allow them some space of their own.”

Fellow homesteader Amanda Hyatt Deen, who got her chickens in February, lets her young hens, known as pullets, roam through a fenced area without overhead netting, but keeps nearly mature black ducks with them to dissuade birds of prey, which she says avoid them. She got the idea to keep the ducks with her chickens from a video that someone posted on YouTube, which showed a few black chickens would protect the flock. Because she wanted ducks for eggs and meat, she decided to use them rather than black chickens. Deen says her area in southwest Louisiana has bald eagles, hawks, coyotes, red foxes, opossums, and wild dogs, but so far, they’ve had no losses. The trick to this, she says, is to have the birds grow up together. According to Deen, they haven’t had any problems with aggression from the ducks towards the chickens, and she believes it is because they all grew up together.

Make sure your chickens are in a secure area where predators can’t get to them easily. “The biggest mistake people make when it comes to their chickens is to just let them run willy nilly however they want,” says Philip Clauer, a professor in the Animal Science Department and the Poultry Science Club advisor at Penn State. With 50 years of experience, he notes with confidence that if chickens aren’t protected, they’re going to get picked off.

Torres, who has been raising chickens for about 20 years, lets her chickens range  freely during the day and puts them in their coop overnight with screened windows over nesting areas so she can just open them and reach in. “Free range doesn’t mean you just turn your chickens loose,” she says. “You have to have a bit of a plan.”

She also leverages nature for some protection overhead, keeping trees in the yard which serve as a “great deterrent” and discourage hawks from swooping in. She can see and hear hawks swooping right above the trees regularly, but thanks to the tree canopy, they can’t get to the chickens. She occasionally takes poultry protection into her own hands — literally. When necessary, she runs out of the house firing a 12-gauge shotgun to scare predators. At night, she also relies on her dogs. They run loose and do a good job of scaring off raccoons and skunks. She says the dogs will chase the chickens off of the dog food, but otherwise tend to ignore them.

“It’s pretty guilt-inducing losing chickens. You sit and think about what you could have done differently,” Torres says. “When you have animals, it’s your job to protect them. We’ve taken them out of their natural habitat for our own convenience.”